Pakistan captain Misbah-Ul Haq said that he hoped his team’s series win over test cricket’s number one side England will earn them respect from the cricketing world after a turbulent period which tarnished their image. 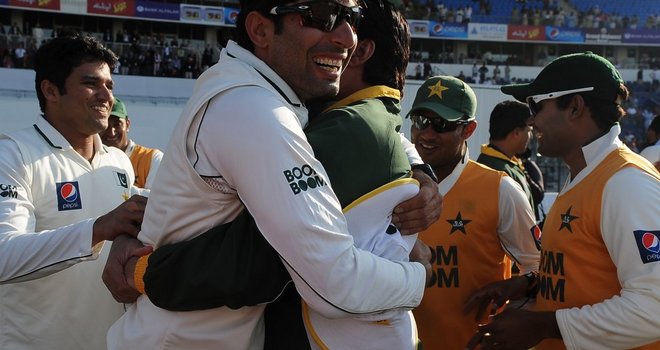 Misbah said that he think the whole world should acknowledge and accept that Pakistan cricket is coming up, the way our players are performing and they should accept it. Coach Mohsin Khan said that these are good days to relish after the bad times. He said that the Pakistan cricket has suffered badly in the last two years but the management and the team has done well to transform it. English captain Andrew Strauss has described England’s defeat against Pakistan in Abu Dhabi as among the most painful of his career. Strauss said that it’s bitterly disappointing to lose a game you should have won. Strauss top scored with 32 as his side was dismissed for 72 in pursuit of a target of 145. It was England’s lowest total against Pakistan and only the second time they failed to chase a target of under 150 in the fourth innings in more than a century. The result condemned them to their first series defeat since losing in the West Indies in 2009.