Crafty off-spinner Saeed Ajmal has risen one more place and his spin partner Abdur  Rehman has broken into the top 10 for the first time in his career in the ICC player rankings for test bowlers. 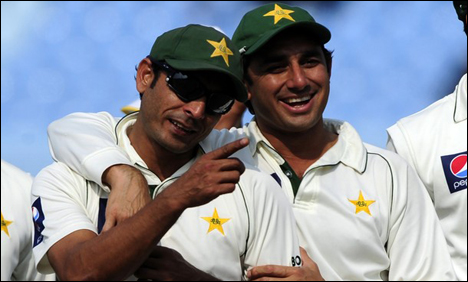 Saeed Ajmal followed up his 10 wickets in the Dubai test with seven in the Abu Dhabi test which was enough to put him ahead of England’s fast bowler James Anderson in second position. The 34-year-old has earned 50 ratings points for this achievement giving him a career-best rating, and he now leads Anderson by 25 ratings points but still trails number-one ranked Dale Steyn of south Africa by 84 ratings points. Left-arm spinner Abdur Rehman has jumped five places to ninth spot. This is after 23 years that two Pakistan spinners figure inside the top 10 of the test player rankings. In September 1988, Abdul Qadir was ranked fifth and Iqbal Qasim 10th. In the batting ranking Misbah Ul Haq has broken into the top 10 for the first time in his career in eighth position by rising six places following his contributions of 84 and 12 runs.