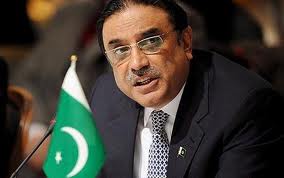 Addressing the launching ceremony of Sindh Vaseela e Haq program in Karachi, the President announced to provide three hundred thousand, soft loan to unemployed youth. He appreciated the Sindh Chief Minister Syed Qaim Ali Shah for allocating 12 billion rupees to provide soft loans to 35 thousand unemployed persons, consisting 60 percent women. The President said every day machinations were being hatched against the elected government but we continue to defuse situation through reconciliatory politics. He said the elected government would complete its mandate and fulfill all promises at the end of five year tenure. President Zardari said economy is on the right track and now it is up to the entrepreneurs to avail the opportunity. He said the government was pursuing the policy of trade instead of aid and regional trade is being promoted to create more employment opportunities. Earlier President Asif Ali Zardari and chairman Pakistan People’s Party Bilawal Bhutto Zardari performed the ballet draw ceremonies of Benazir income support program and Sindh Vaseela e Haq initiative. The President also gave away cheques of soft loans to the deserving families for starting their own business. President Zardari urged the recipients of loans to start dairy business, saying they would break even in the first year.