The death toll from the spurious drugs in Lahore has risen to 118 after five more patients died in Punjab institute of cardiology. 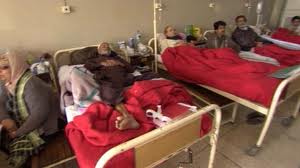 Another 350 such patients are under treatment in different hospitals of the city. Several patients have been discharged from hospitals after treatment. Heart patients are so fearful of spurious drugs that they are refusing to take even certified medicines. The young doctors have announced to go on strike after doctors were held responsible for the incident. President of young doctors association Dr Aamir Bandeshah told PTV News that the Punjab government is shifting the responsibility to the doctors to cover up its failure.

Interior Minister Rehman Malik has directed the FIA to hold a transparent inquiry into provision of fake medicines to heart patients.

He has also directed to ensure the arrest of all those who have committed this crime. The minister has asked the FIA to get data of the heart patients using these medicines from the concerned hospitals.